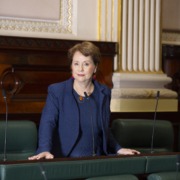 Independent Member for Shepparton District Suzanna Sheed has welcomed an e-petition calling for the restoration of democracy in the Victorian Government.

Ms Sheed has been tirelessly campaigning for the return of non-government business in the Victorian Legislative Assembly, a right every other lower house in Australia enjoys.

The non-government business program allows non-government members to move motions, progress private members bills, and utilise a number of other procedures in the house.

Mr Woodruff, a Deakin Honours student, said he was shocked to learn that the Victorian Legislative Assembly’s non-government business program had been whittled away since the 1990s by consecutive governments.

“I would urge everyone who has an interest in a fair democratic process in Victoria to sign this e-petition so together we can show the government how important fairness is for all Victorians,” Mr Woodruff said.

Ms Sheed said it was vital for the equality of all Victorian residents that their elected member be given the opportunities to have a fair hearing in parliament.

“This is a fundamental element of democracy,” Ms Sheed said.

“Without non-government business, the opposition and crossbenchers are not given the opportunity to represent their constituents in the same way as government members.

“Almost every Tuesday that parliament sits I have asked for leave to move a motion to debate the re-introduction of non-government business and each time the Labor Government refuses leave for that motion to be debated.

“Independents are the way of the future, and I will not give up the fight to have our fair hearing in the Victorian Parliament.

“Following the November election, I can anticipate many more independents occupying the crossbench seats of the Victorian Legislative Assembly, and I am sure they too will not remain silent when it comes to the unfair system that currently exists.

“We all need the opportunity to bring on motions, private members bills and use other mechanisms of debate so that we can properly represent those communities we have been elected to represent.”