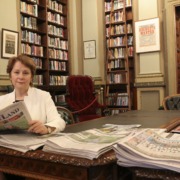 I am pleased to rise and resume after the 10 seconds I had just before the bells rang previously. In speaking about the federal budget there are a couple of things that I would like to say.

Firstly, I think there is disappointment in our regional areas in relation to the regional fund—the fact that the Shepparton bypass has been a project on the books for over 20 years, that governments have stood time after time out on the highway and promised that that connection from the Goulburn Valley Highway through to the New South Wales border at Tocumwal to complete what is a national highway system would occur, and to know that the Victorian government completed the business case over 12 months ago, that it has been sitting on the desk of the federal infrastructure minister, our Deputy Prime Minister, throughout that period. It is fair to say that people in my electorate expected an announcement on that 80 per cent funding that the federal budget could have delivered to see that major project go ahead. So it is disappointing to see that so much of the regional funding will be spent in northern Australia building dams, not for further irrigation in the south, where we are already developed, but further dams to provide water for further development of mines and a few corporate farming enterprises in regions of Queensland.

There is certainly disappointment across regional Victoria at the lack of funds that came out of that fund. But I want to specifically talk about health today, because the motion that has been put is in relation to the $1.5 billion of COVID funding that is to finish in September this year. I have to say that as a regional MP, it is pretty clear to me and to most people I talk to that COVID is not over. Every day we are seeing COVID numbers reported of 10 000, 12 000, 15 000 people. We know that the real number in the community is probably triple that. We know that every day people, Victorians, are dying, and we know that the impact on our hospital system still remains very significant. I think it is realistic to say that that is not going to go away overnight. We cannot say that in September the impact of what has occurred over the last two years will have reduced and will have disappeared in terms of the way our hospital systems are now functioning and the incredible pressure that they have been put under.

Recruiting medical people—nurses, doctors—in regional areas is an enormous challenge. We are feeling that at Goulburn Valley Health, the major regional centre in my electorate, with over 80 doctors needing to be recruited and over 60 nurses needing to be recruited as well as a whole range of other hospital staff. Almost 10 per cent of the workforce at Goulburn Valley Health are not there, effectively, because of the challenges in recruiting them. I would just like to say that over the last two years the challenges that Goulburn Valley Health have faced in Shepparton have been enormous. We had more COVID outbreaks. We had additional shutdowns. We unfortunately for a regional area really copped it a lot more than others for a range of reasons. But our chief executive officer, Matt Sharp, and all our health workers across our region, even across our smaller hospitals—Nathalia, Cobram, Numurkah—did a fantastic job to care for the community, to look out for their needs and to ensure that a level of health care could be continued throughout that period, with a COVID ward set up especially in Shepparton, and that still exists.

To think that somehow this is all over is a huge mistake. I would like to refer to an article, a news piece that was on ABC regional radio just last week, warning of the crisis in our regional hospitals. They continue to be under enormous strain with the huge demand, especially in the north of the state, which is the area I know best. A code yellow internal emergency was declared at Albury Wodonga Health last week, and it is the second time that has happened in just a very short period—less than a month. A code yellow was declared last Monday at Northeast Health Wangaratta. Shepparton’s Goulburn Valley Health has urged people to avoid its emergency department if they possibly can because of the excessive demand. They are encouraging people to go to their GPs, to use other services, even Nurse-on-Call.

Now, that is all very well, but we also have a drastic shortage of GPs in our region, and that is something that simply is not being sufficiently addressed by the federal government. In the town of Mooroopna there were two medical practices, Dr Chan’s and the Mooroopna Medical Centre. Dr Chan by virtue of age and hard work has retired. He has sent a letter to all his patients saying that he is no longer there. There really is no-one for him to refer them to. There is no-one, as I understand it, taking over his practice—just another GP—in a town like Mooroopna, with a population of over 8000, left with one practice in the town.

That has major implications for our emergency departments, because when you do not have GPs providing that on-the-ground daytime service and after-hours service to the community, the only place left to go is your emergency department. I am told that it is not so much that we are seeing so many COVID patients right at the moment but that we are seeing the burden of illness that has developed over the last two years from people who have not been going to get the health care they need, perhaps been ignoring symptoms, not having tests that they would otherwise have had, perhaps not having those breast screens, not getting their diabetes management—a whole lot of things that people would have normally done as part of the course of their day-to-day life they were not doing. So the load now is huge, and the burden on our health services across the state—but I am talking specifically of our region—is also huge. When you cannot find the people to fill the positions, that can only get worse, and it bodes ill for the overall health of our community.

So to think that $1.5 billion might be just slashed from the state of Victoria come September is really concerning to me, because if anything we need more. There is so much more to be done. It is all very well to say that we have the Department of Rural Health at Melbourne University and they are training doctors who may one day come back to the country, but let me tell you they do not even keep statistics on that. Occasionally a doctor trained in a rural area will go back to a rural area, but not very often. They are not coming back in hordes, I can tell you. They are not coming back, and no-one is addressing the shortage of that general practice primary health care across our regions.

Is it at a point now in country areas where expectant mothers need to take towels, scissors and a piece of string with them when they are making their way to a hospital? It is not good enough that services are not available for people in regional areas. The mental health services are underdone, and again staffing is a huge problem. Certainly in Shepparton we are hoping that stage 2 of the redevelopment of Goulburn Valley Health and its mental health services will be a high priority, as I hope will an early parenting centre. I see the Minister for Health at the table, and I cannot let that go by without mentioning it, because they are major projects to really attend to the health of our community.

It was an amazing time in some ways, prior to COVID, to see the investment that occurred in Shepparton with the development of stage 1, and our new hospital and new buildings are about to be opened very soon—a new emergency department, a new five-storey building on the site of the hospital. All these things will make a difference, but there is no doubt that the major issue now is about people. It is about finding the people to do the work within our hospital system, and that may be a call-out to older people who have retired, to people even coming back part time. But I say, ‘Leave the money in the system, and put more in’.