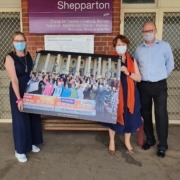 Independent Member for Shepparton District Suzanna Sheed has today welcomed the Minister for Transport Infrastructure Jacinta Allan to Shepparton to announce the beginning of works on the next step in the Victorian Government’s investment along the Shepparton line.

The minister has also made an $80 million pre-budget announcement to enable works to continue and help provide VLocity trains on the Shepparton line.

“I’m delighted that the Shepparton Rail project is getting an extra $80 million and that so much of the work has either already been done or started,” Ms Sheed said.

“It’s been five years since the All Aboard campaign, including many community members and myself, travelled to the steps of the Victorian Parliament calling for better rail services for Shepparton.”

“I am proud to say that Shepparton locals worked hard to ensure their voices were heard and that our community’s needs are being met because of that hard work.

Today the minister has announced that work is now underway to deliver the infrastructure that will take VLocity trains to Shepparton for the first time and give Shepparton Line passengers the modern, reliable public transport services they deserve.”

“This announcement is a great example of what can happen when local people come together with their Independent member to clearly advocate for what is needed.”

“The rail upgrade work is vitally important to the Shepparton community and the local economy, bringing greater services to and from metropolitan Melbourne and Shepparton.”

“It is also heartening to see that the government is prioritising local suppliers and giving local contractors the chance to work on the project. This is great news for local jobs and should enhance the skills available in the Shepparton area into the future.”

“Shepparton is looking forward to the project almost doubling the number of services each weekday and delivering faster journeys.”

“We are particularly looking forward to the day when the faster, longer and more comfortable VLocity trains begin travelling on the line.”

• Upgrade train detection technology at 59 level crossings between Donnybrook and Shepparton, with 32 crossing also being upgraded from Stop and Give Way signs to boom gates, bells and flashing lights – boosting safety for train passengers and local drivers.

• A crossing loop extension at Murchison East – giving trains more room to pass each other and reduce unexpected delays.

• Construction will focus on engaging as many local suppliers as possible.

Stage 2 of the Shepparton Line Upgrade is set to be complete in late 2022, with interested businesses encouraged to register at www.gateway.icn.org.au to get involved in upcoming industry engagement sessions.

Rail Projects Victoria is also getting on with planning and design work that will inform Stage 3 of the project – which will deliver even more benefits for Shepparton passengers, almost doubling the number of services each weekday and delivering faster journeys.

Stage 3 will deliver the signalling infrastructure between Seymour and Shepparton to enable nine weekday return services, more stabling for VLocity trains and track upgrades so trains can travel faster.