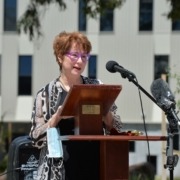 Independent Member for Shepparton District Suzanna Sheed has taken aim at the State Liberal and National Party members of parliament for using the new Greater Shepparton Secondary College as a political football.
Ms Sheed said that while Liberal Member for Northern Victoria Wendy Lovell constantly sought out negative elements of the school to raise in the Victorian Parliament, the leader of the Nationals Peter Walsh also found ways to criticise the new school.
“As with all schools in Victoria, Australia, and across the world, you will find that there is bullying and other issues and I know that complaints of bullying are being taken seriously at the new Greater Shepparton Secondary College,” Ms Sheed said.
“But to constantly seek out negative issues and ignore the successes of the school is not only misleading but is damaging to our students who feel tremendous pride studying at a brand-new school.
“Do they not think that our young people in Greater Shepparton Secondary College want to be proud of their school; want to value their school; want to be able to say; ‘I go to Greater Shepparton Secondary College’; want to grow up one day and say: ‘That’s the school I went to,’ and know that they have achieved something?
“I would have thought these politicians could leave their politicking aside and put the aspirations of young people first.
“Every day our Shepparton and district students have their aspirations raised by attending one of the best schools in Victoria with a learning place that reflects the professional environment they will eventually transition to through tertiary education, training, apprenticeships, or heading directly into the workplace after Year 12.
“Instead of four underfunded and underperforming schools, resources are now pooled together, and our deserving students can have the very best facilities, teachers, and additional services they need.
“While Shepparton’s students continue to reach for the stars, they are dragged down by these politicians who are just trying to get scores on the board against me ahead of the November election.
“I am proud to have convinced the Victorian Government to fund this state-of-the-art school to the tune of $140 million.
“Taking political digs to criticise me is really only dispiriting our children and it needs to stop.”
ENDS
Media contact
Elaine Cooney 0447 820 466│elaine.cooney@parliament.vic.gov.au
PDF version here
https://suzannasheed.com.au/wp-content/uploads/2022/02/GSSC-Opening-2.jpg 1670 2510 Suzanna Sheed https://suzannasheed.com.au/wp-content/uploads/2020/04/Sheed-Logo-V2.png Suzanna Sheed2022-05-25 13:49:152022-07-05 15:27:57Sheed takes aim at politicking of new school
0 replies