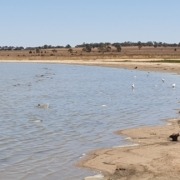 Independent Member for Shepparton District Suzanna Sheed has called on both the Commonwealth and Victorian Environmental Water Holders, as well as the acting Minister for Water Richard Wynne, to allocate environmental water for Greens Lake.

Greens Lake was previously used by Goulbourn Murray Water for water storage to supplement the larger storage of Waranga Basin. As a result of the Connections Project which concluded last October, significant water savings for the environment were achieved and as part of the project the Greens Lake was decommissioned.

This means the only water now available to the lake is the extremely limited amount which accumulates from the natural catchment.

“Prior to its decommissioning, the lake was a very popular recreational area. It has a boat ramp, camping facilities and the Shire of Campaspe recently installed new toilet facilities. Families regularly camped in the lovely tree surrounded location, and fishing and boating were popular on the lake,” Ms Sheed said.

‘Up one end of the lake is a wetland area which has many water birds including brolga, pelicans, ducks and many other species.

“Over the summer the lake has been dropping considerably and is now at 21% capacity. Many people in the community are concerned about the loss of this local recreational facility, especially following the decommissioning of Lake Cooper several years ago.”

“They have also expressed concerns that a fish kill is imminent because of the falling levels and the warm weather. I have now been advised that a nearby smaller lake is experiencing a fish kill as a result of low water levels.”

“It is apparent that when this project was put together little or no thought was given to the recreational and environmental values of the lake for our local community and the impact of that loss is now being felt,” Ms Sheed said.

“Allocation for Greens Lake will restore its environmental values, which will have the flow-on effect of enabling recreational users to also enjoy water activities, fishing and boating on the lake. This would also contribute significantly to the community and social amenity of the area.”

Sheed presses government for solution on firewood collection and permits

Shepparton delegation to learn about the Northern Basin
Scroll to top