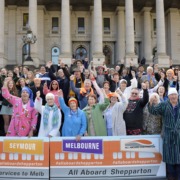 Independent Member for Shepparton District Suzanna Sheed asked the Minister for Transport Infrastructure in parliament last week when the Victorian State Government would step up and contribute the outstanding $80 million to complete stage 3 of the Shepparton rail line upgrade works.

“The Victorian State Government has funded stages 1 and 2 of the Shepparton line upgrade at a cost of some $356 million,” Ms Sheed said.

In its recent budget the federal government made a $320 million contribution towards the final stage 3 of the project and foreshadowed that a further $80 million would be required from the Victorian government to bring it to completion.

“I, along with my community expect the Victorian government to come to the table now to ensure the Shepparton line upgrade will be funded in its entirety.”

“For far too long our community had been neglected on rail. It took a grassroots community All Aboard Campaign travelling to the steps of Parliament in 2015 to put rail on the government’s radar, resulting in a $356 million investment to fund stages 1 and 2,” Ms Sheed said.

Stage 1 works have been completed allowing for 10 additional train services between Melbourne and Shepparton and 29 bus services weekly as well is additional stabling at the station.  Stage 2 will include platform extensions, new stabling and up to 59 level crossing upgrades to enable VLocity trains to travel to and from Shepparton and early works are now underway.

The Minister for Transport Infrastructure stated that the government would have more to say about its contribution very soon and committed to having VLocity trains running on the line for the first time at the end of 2022.