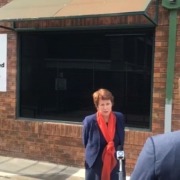 Independent Member for Shepparton District Suzanna Sheed has called on the Victorian Government to deliver consistent and targeted investment in Shepparton amid stark unemployment figures released this week.

Ms Sheed said the number of people employed in the Greater Shepparton region fell 18 per cent from February last year to September this year.

“This means Shepparton has been the most impacted local government area in the entire state in terms of job losses since the pandemic began,” Ms Sheed said.

“These figures represent a loss of 12,292 jobs in our district and we urgently need State Government investment in major projects and manufacturing opportunities, so we don’t see this trend continue.

While the impacts of the pandemic certainly contributed to these job losses, other data released by the Australian Bureau of Statistics shows that the lack of harvest workers in the district only accounted for a reduction of 2,200 workers.

“We lost 3,800 workers from the retail trade industry, 2,000 from health care and social assistance, and 1,200 from the utilities sector between February last year and August this year.

“The pandemic has raised the unstable nature of employment in our region, and it is time we received much-needed investment in long-term permanent projects to give our workforce the certainty it needs during our post-pandemic recovery and into the future.

“I want Shepparton to be first on the Victorian Government’s list when looking at job-creation deals such as manufacturing, energy production, and major projects such as the Shepparton Bypass.

“Earlier this year, the Victorian Government signed a memorandum of understanding with Hanwha, a major South Korean global company, to build and maintain Australian military vehicles in Geelong, creating hundreds of highly-skilled jobs.

“The City of Geelong is supported by a consistent stream of targeted investments in major projects, and we can see this translates to positive employment statistics, with the city boasting a growth of 18,197 jobs from February last year to September this year.

“We need the same, if not more investment in Shepparton, to see our employment rates increase and our industries grow.”

Sheed speaks out against rushed pandemic legislation
Scroll to top