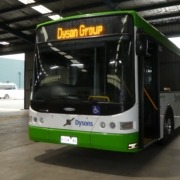 Independent Member for Shepparton District Suzanna Sheed has called for an urgent review of the Shepparton and Mooroopna town bus network.

“The bus services are infrequent, extremely limited on Saturdays, don’t run at all on Sundays or public holidays, fail to coordinate with rail services at Shepparton Railway Station, and ignore Shepparton and Mooroopna’s growth areas,” Ms Sheed said.

The need for a review is urgent, Ms Sheed told the Victorian Parliament this week.

“We now have a new school being built which means more people will rely on transport to get connecting buses to and from school.”

“Mooroopna and Shepparton have expanded significantly since the last review was undertaken and completion of stage one of the redevelopment of GV Health, the impending completion of the Shepparton Art Museum and numerous other developments are creating a much greater demand on our public transport system,” Ms Sheed said.

“Services are infrequent, running only hourly between 8am- 6pm on weekdays, limited service on Saturdays, and none on Sundays or public holidays, with no direct bus link between Shepparton and Tatura. It’s mind boggling that the bus doesn’t coordinate with any rail services at the Shepparton Railway Station and it doesn’t service many of Shepparton and Mooroopna’s growth areas.”

“The Shepparton and Mooroopna bus network has had no substantial update since 2008 and was last reviewed in 2006, that’s fourteen years ago. A review is well overdue,” Ms Sheed.

“I’ve spoken with the bus companies, heard from the community and it’s very clear the current bus network is inadequate, failing to serve the needs of our community, and particularly disadvantaged people with high social needs and it must be addressed,” she said.

“The current system is inadequate, and I would ask the minister to address this as soon as possible,” Ms Sheed told Parliament.