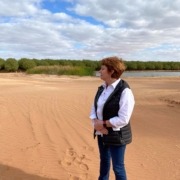 Independent Member for Shepparton District Suzanna Sheed welcomed the response in Parliament this week to her call for action on floodplain harvesting in the northern Murray-Darling Basin.

“I have been very concerned for some time that the Victorian Government is taking a backseat role in representing Victoria’s interest on this critical issue,” Ms Sheed said.

“I have been watching the developments in northern New South Wales closely and the attempts to legitimise floodplain harvesting by government regulation. The upper house of the New South Wales Parliament has disallowed these regulations and has now called for an inquiry into the practice.

“My recent trip up the Darling River and across the Northern Basin showed the huge number of dams that have been built since the state signed up to the Murray-Darling Basin Agreement in 1995.

“It is simply not good enough that New South Wales has ignored the terms of this agreement by continuing development when Victoria has abided by its terms.”

Ms Sheed, who is making her own independent submission to the inquiry, called on the Victorian Government to make a submission detailing Victoria’s critical interests, before submissions close next Friday, 13 August 2021.

He said the State Government opposed floodplain harvesting and would continue its advocacy to get a decent and a sustainable outcome when it comes to the Murray-Darling Basin, and particularly related to traditional owner groups.

Ms Sheed told Mr Wynne that the Murray-Darling Basin Agreement means that Victoria and southern New South Wales must provide South Australia with a share of water but when the Darling River does not flow, it has to supply a greater amount.

“On top of this the environmental damage to the Darling River has been devastating and flows have been reducing progressively over the last 20 years,” Ms Sheed said.

“We saw and heard from farmers and community representatives all along the Darling River on our recent trip and it is extremely concerning these issues are not being properly addressed.

“It’s unfair that Victoria and southern New South Wales have to sacrifice water from the Murray River, when the water is being depleted from the Darling River by irrigators in the Northern Basin.

“A failure to supply from the Darling River in any year directly affects the water allocations on which the Murray River irrigators depend.”