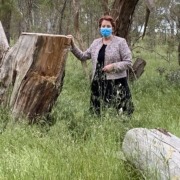 Independent Member for Shepparton District Suzanna Sheed is pleased that action has been taken on illegal timber harvesting in Shepparton but said more needs to be done.

Shepparton residents told Ms Sheed that the illegal loggers were using chainsaws at all hours of the day and night to steal trees that would be sold as firewood in Shepparton and Melbourne.

“From a large number of incidents, only five people have been prosecuted for illegal timber harvesting activities within the Lower Goulburn National Park but none at Shepparton Regional Park.

“While this is quite a low number, a further seven prosecution briefs are currently being prepared against 11 people and 10 infringement notices have been issued.

“One person was fined $7,500 for the illegal removal of firewood and damage to wildlife habitat, and another was punished with a 12-month jail sentence.

“While action is being taken against these criminals who are decimating our local environment and wildlife habitat, causing angst among nearby residents, and avoiding paying taxes, I feel that many are avoiding detection and not facing our courts.

“However, I am heartened that the targeted operation on illegal logging will continue to be led by the Conservation Regulator and Parks Victoria until the end of 2022.