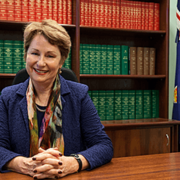 Independent Member for the District of Shepparton Suzanna Sheed has expressed her anger that the release of the long-awaited Shepparton Bypass business case has been delayed.

The latest delay was revealed yesterday following a question without notice asked by Ms Sheed in the Victorian Parliament of the Minister for Transport Infrastructure, Jacinta Allan.

“It was my understanding that the business case would be delivered this month and it is disappointing to hear the Minister say the release of it has been delayed until next year.

“I would be horrified to think that this project might take as long as the Echuca bridge. That has just dragged on for so many years. This is an important project because it links Brisbane to the Port of Melbourne. It is a federal project as well, and the federal government have now put $208 million on the table towards this project,” Ms Sheed said.

Later, Ms Sheed expressed her anger over the delay.

“The people of Shepparton and Mooroopna have been waiting decades for this project. The land is acquired. The Federal Coalition Government have committed $208 million to date and no doubt recognise that more will be required for this project. All that is holding it up is the business case which will indicate the funding required and the Andrews Government continues to delay this.,” Ms Sheed said.

“My constituents deserve better than having industrial traffic forced down their main thoroughfares. It is noisy. It is dangerous and it damages the heart of our townships.

“We have been well served by the Andrews Government in health, education and rail funding and I call on that government to continue its good record in the Shepparton District by delivering the Bypass business case.”

The Orange Door
Scroll to top