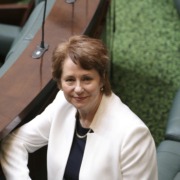 In this regard I want to speak first about the Connections Project. I know a lot of people over many years will have heard of the Connections Project, but I think having now reached its conclusion it is important to reflect on what that project delivered and what it means for our communities. It was the largest irrigation project ever undertaken. It was delivered by the Victorian government and jointly funded with the federal government. It has achieved 429 gigalitres of water savings, and 279 gigalitres of that water is part of Victoria’s commitment to the Murray-Darling Basin plan. I will say something more about that in a minute. 1725 kilometres of channels were decommissioned, 9500 meters installed and 7700 landowners’ systems modernised, so it was truly an amazing project, and it was born out of a realisation during the millennium drought of the changing climate, the need for modernisation of irrigation systems and of course issues of food security being recognised. We all remember the millennium drought and around about 2006, 2007 and 2008 that extraordinary time of unbelievable lack of water supply. The lake in Shepparton was completely dry for several years and there were no irrigation water allocations to farms. Dairy farmers were leaving in droves and marriages were breaking down—a truly horrendous time for those of us who lived in those regional towns where the impacts of the drought were felt.

A large community group got together. They called themselves the food bowl group and in negotiations with the Brumby government they were able to put together a plan for this modernisation project. There were over 4000 kilometres of channels winding their way through these irrigation areas, and the modernisation of that capacity reduced the channel length to improve the ability to deliver water to farms. We ended up seeing many channels being lined, some channels being closed and new and modern meters installed on our river systems. What we have been left with now is an extraordinarily modernised system of irrigation. We have lost many farmers along the way, particularly in the dairy industry in northern Victoria, and that is certainly a tragedy and a concern in itself.

But the project has seen delivery of part of our water requirement to the Murray-Darling Basin plan, and with only a couple of years left to go until effectively D-Day on the Murray-Darling Basin plan, when the audit of water delivered by all of the states to achieve that 2750 gigalitres will be undertaken, there is a serious concern in our region about the fact that there are still many projects underway that will not be completed by that date. New South Wales, Victoria and even South Australia are saying, ‘We’ve got projects underway but they cannot be completed by that time’.

Under the current federal Water Act 2007, if the water is not delivered, if it is not available, if it is not part of the plan by that time, the legislation provides for the federal government to go out and buy the water. We saw the impacts of buybacks on our regions—empty shops, farmers leaving. We are terrified in our community that that will happen again, and we see a federal Liberal-National party government with no plan for what will happen in 2024. We have an opposition Labor federally who have not said what is happening, but they have always stood by delivering the plan in full and on time.

We have an independent standing in our region; there are many independents standing across areas in this forthcoming federal election. Our only hope is to have an independent who can negotiate effectively with whoever is in government at the time. When 2024 comes we need to know that the Productivity Commission will be listened to, that flexibility will be delivered and that there will be more time given to governments and communities to deliver the water that does need to be delivered but to do it in a way that is feasible.