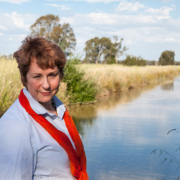 Member for Shepparton Suzanna Sheed has criticised the Federal Government for cancelling the scheduled meeting of water ministers in Adelaide this week.

MINco, where state water ministers meet to discuss the vital issues regarding the Murray-Darling basin and which usually meets twice a year, will not have its planned November meeting.

“I am deeply concerned that the Federal Water Minister Keith Pitt sees no need for a MINco meeting this year considering the serious water issues the states are facing.

“There has only been one MINco meeting in the past year, yet we are at the pointy end of the Murray-Darling Basin Plan with major water recovery issues yet to be resolved before the stocktake in 2024,” Ms Sheed said.

“Our major concern in the Goulburn Valley is that the Southern Basin will not have met its water recovery target by 2024, and we do not want any further water take from our districts if this issue is not resolved when a full assessment of water recovery is undertaken in 2024.

“In the Goulburn-Murray irrigation district, we have given up so much water already, with disastrous impact on our dairy industry. We still have our smaller core of dairy farmers, our horticulture and mixed farming to protect, all of which are under threat from future water buybacks.

“We are the most obvious target for buybacks because of our abundance of secure high-reliability water.

“Time is running out for the Basin Plan, but we still have an opportunity to act now before we reach a crisis point and we are held to ransom to part with our water at the eleventh hour by way of buybacks.

“We need to talk through the introduction of a more flexible rollout of the projects, giving the plan a better chance of ultimate success.

“There are projects being reworked at the moment between the Federal Government and the New South Wales Government in relation to Menindee and we need to know what this means for Victoria.

“In the last few years, the flow down the Darling River were insufficient to make a contribution to the share of water required to be delivered to South Australia, leaving the Murray River system to make up the difference.

“We need to hold New South Wales and Queensland accountable for not making any efforts to enforce the 1995 Murray Darling Basin Cap, which limited water allocation in each basin and provided there would be no further development of water storages that would increase water use.

“Victoria introduced Farm Dams legislation in 1998, which was incorporated into the Victorian Water Act. This allowed for the licensing of current dams but prevented further development unless it was transferred from an existing licence.

“New South Wales not only failed to introduce similar laws, but it defiantly ignored this cap agreement and we have seen irrigators continue to build enormous dams to harvest water. This issue needs to be discussed at MINco before the 2024 deadline of the Basin Plan.

“We also want our Victorian MINco representative, Water Minister Lisa Neville, to be able to ask questions and request detailed plans on the future of the struggling Barmah Choke.

“With a Federal election looming in the coming months, we should be aware that this government had plenty of time to make positive decisions on behalf of irrigators in the Southern Basin but failed to do so.

“One has to question whether the Federal Government is trying to push its disastrous management of the Murray-Darling Basin under the carpet to save face ahead of the election.

Sheed calls for regional Victoria to be exempted from Windfall Tax