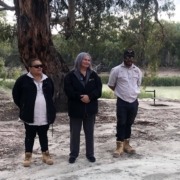 Independent Member for Shepparton District Suzanna Sheed met with Barkandji Rangers on her Truth and Water Tour of the Northern Basin, who explained the cultural importance of the Menindee Lakes.

Ms Sheed and her convoy of water stakeholders and councillors met with Barkandji Rangers Cheryl Blore, Barb Quayle and Fred Bennett at the Menindee Lakes yesterday (Tuesday), to understand the Indigenous history of the area.

“It was heartbreaking to see how Indigenous people in Menindee have suffered from the lack of water in the Menindee Lakes,” Ms Sheed said.

“This land has more than 6,000 significant cultural sites, including burial sites and middens. They told us about their distress arising from the current water management arrangements.”

Under current rules, New South Wales can bypass giving the lower lakes water if the storage in the upper lakes stays below 640GL. Menindee local Graeme McCrabb explained the operating rules of the Menindee Lakes to the delegation.

“To see those lakes dry when they are of such cultural value is devastating to the Barkandji people, Ms Sheed said.“While our irrigators in the Goulburn Valley are crying out for their share of the water from the Darling River, so too are the Indigenous communities who rely on the continuation of the Darling for their cultural and social practices.”

Continuing the tour from Menindee to Tilpa, the delegation met with Kallara Station owners Julie and Justin McClure, who discussed the importance of an equitable share of the river for all water users in the Northern and Southern Basins.

“Justin was concerned that the floodplain harvesters up north had no obligation to share water with water users further south. He agreed that there should be rules around end of catchment targets and metering when capturing water,” Ms Sheed said.

This afternoon the delegate spoke to Brewarrina floodplain grazier Ed Fessey, who made a submission to the Murray-Darling Royal Commission in South Australia in 2018.
Mr Fessey suggested that the removal of Class A licenses and carryover in the Barwon River should solve 30 per cent of the water delivery issues downstream.

“The common theme we heard from Ed and the others we met along the way was the importance of maintaining the low flow flushes in the upstream rivers and establishing flow targets at the end of catchment,” Ms Sheed said.

“We were impressed with Ed’s vast knowledge of the Northern Basin.”

Tomorrow the delegation will continue its journey north and learn about Cubbie Station at Dirranbandi and travel on to St George and Moree.

We realised the importance the Menindee Lakes system has on the entire Murray-Darling Basin and how it needs to include Indigenous culture. One of the interesting things we learnt was that if we find a yellow perch in the Goulburn River behind Aquamoves, it more than likely was spawned in the Menindee Lakes.

I was moved by the passion of people who live on the Darling River for the loss of their river. Some of them have had six generations on the river and to watch it degrade the way it has is upsetting for them and for us.