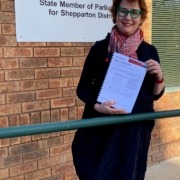 The Goulburn Valley Highway Shepparton Bypass is one step closer to fruition following a proposal lodged with Infrastructure Australia to have the major project recognised on its Priority List.

The submission highlighted the importance of getting the bypass underway, acknowledging the rapid development and expansion of Greater Shepparton and its growing population, as well as addressing safety issues. Not only would the bypass create jobs and economic stimulus to the region, but it would also provide much-needed upgraded national highway connectivity across our states.

The Infrastructure Australia Priority List sets out the investment opportunities that can deliver nationally significant benefits to Australians, helping to guide decision makers towards infrastructure that supports productivity and quality of life.

Member for Shepparton District Suzanna Sheed said the bypass would form part of the greater road network between Melbourne and Brisbane.

“Our region has seen substantial growth in recent years with investment in health, education, rail and the arts,” Ms Sheed said.

“This bypass has been a priority for our region for decades and its implementation would not only service our district but the transport capacity of the eastern states of Australia.”

“Greater Shepparton acts as a major food-bowl and centre for Australian agribusiness, with the combination of primary production and food manufacturing meaning the region serves as a major freight transport hub,” she said.

“With currently only one river crossing for heavy vehicles, the Peter Ross Edwards Causeway, this will likely become even more of an issue into the future as our region’s freight task increases significantly. The bypass is the long overdue solution.”

Construction of the 36km four lane Shepparton Bypass is the next logical step in providing a fully duplicated highway from Shepparton to Melbourne. The current priority is Stage One, a single lane carriageway in each direction extending from the Midland Highway west of Mooroopna to the Goulburn Valley Highway in Shepparton North – a total distance of more than 10 kilometres.

The Australian Government committed $208 million to deliver Stage One following strong advocacy for this transformative project. This funding will be delivered over a number of years in conjunction with funding from the State Government, which is outlined in the Bypassing Shepparton Business Case which is yet to be released.

The proposal submitted to Infrastructure Australia will now be assessed and considered at a board meeting later this year. Written feedback will then be provided before the final publication is released in February next year.

“Much of Greater Shepparton’s future planning and development relies upon the construction of the Shepparton Bypass.

“The region cannot continue in a state of limbo that uncertainty around the project creates.”

“The Goulburn Valley Highway Shepparton Bypass Action Group welcomed the opportunity to participate in the preparation of the proposal lodged with Infrastructure Australia.

“The Bypass Action Group strongly endorses the direct lodgement of the proposal and congratulates Greater Shepparton City Council and the Member for Shepparton Suzanna Sheed for their proactive initiative.”