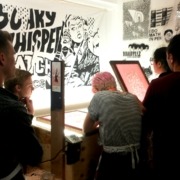 “I’ve invited the new Minister for Creative Industries to the Shepparton Festival so that he can see first hand how inventive, creative and innovative arts practitioners outside of Melbourne can be.”

“Melbourne is the acknowledged cultural capital of Australia but the arts practitioners of Shepparton have many delightful surprises for visitors during the festival.”

“There will be plenty to see and do and it would be wonderful if Minister Pearson could not only join us, but launch and open the Shepparton Festival.”

The festival, titled ‘Unify’, will be held across the Goulburn Valley from 11 to 27 June next year and “will take full advantage of the darkness of night,” Ms Sheed said.

With the tagline “Unique events in unusual places” it has already begun to intrigue Shepparton locals.

Ms Tremper said: “The festival aims to reignite the creativity that our region is so well known for and to give a boost to our visitor economy.”

The festival director, Jamie Lea, says the festival will reach new heights and go beyond expectations to deliver an outstanding experience.

Ms Lea said: “Unify is a call to action on so many levels and the perfect theme for a postlockdown festival. We are all hungry for a festival, but before we know it, June will be here.”

Being a winter festival, it will take advantage of the darkness of night and the magic of projection.
The festival will have special input from Bill Kelly, the Buffalo, New York born and Nathalia based world renowned artist, who will bring his creative and artistic skills to bear.

“Each year we have been delighted by the venues used and the extraordinary performances that have been brought to our city, and next year will be no exception.
“The recent cash injection from the state government of $49,000 will be a great boost to the festival, taking it to the next level of professional development.
“I extend an invitation to our new Minister for Creative Industries to launch the Shepparton Festival and to formally open it.”