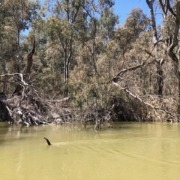 The GMID Water Leadership Forum described the outcome of Friday’s meeting of the Ministerial Council of Water Ministers as an abject failure of leadership.

“In a rare moment of bi-partisanship, New South Wales, Victoria and South Australia had agreed to jointly address some matters of great significance. They came to the meeting with the genuine intention of working together on some of the well-known problems relating to the implementation of the Basin plan,” co-chair David McKenzie said.

“Key issues for final implementation of the plan include the completion of the sustainable diversion limit projects by 2024, the concerns over future deliverability for environmental and consumptive water, and the overall unrealistic timeframes for many aspects of the plan. But incredibly, the bi-partisan approach was effectively ignored by the Federal Water Minister Keith Pitt.

“He failed to capitalise on the goodwill in the room, and effectively directed the States to adopt his approach – to wilfully ignore some worrying realities that confront the final stages of the Plan. If the Federal Water Minister is not going to show leadership on these issues of national importance, then communities have to ask; “what is his role and purpose?” Mr McKenzie said.

Co-chair of GMID Water Leadership Forum, Suzanna Sheed expressed her extreme disappointment in the approach adopted by the federal government at the meeting.

“The Federal Minister says the time for reports is over. In my opinion it is time he started acting on the recommendations of the many reports that have been produced and try to achieve a result that is fair and equitable to all stakeholders,” she said.

“He has ignored the recommendations of the Productivity Commission and the Sefton reports. These are the very reports commissioned by his own government. We were dismayed by with the Federal government’s response to the Sefton report and can now see a complete lack of willingness on the government’s behalf to properly address the issues at hand and to make some hard decisions. The Minister holds the threat of buybacks in his back pocket, threats we heard from Minister Littleproud just over a year ago,” she said.

“This failure of leadership leaves our southern basin communities anxious and without certainty. It continues the negative impacts we have had to live with so long and shows an extraordinary lack of willingness to grasp the nettle and make some decisions that are clearly warranted at this time,” Ms Sheed said